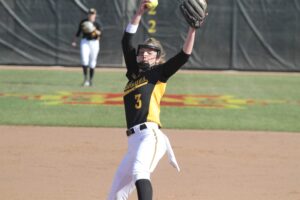 Former Ankeny pitcher Allison Doocy continues to etch her name in the Iowa softball record book. Doocy threw the 18th no-hitter in program history on Sunday, leading the Hawkeyes to an 8-0 victory at Rutgers in five innings. She finished with five strikeouts as Iowa completed a sweep of the four-game weekend series. It was the Hawkeyes' first no-hitter … END_OF_DOCUMENT_TOKEN_TO_BE_REPLACED

March 12 was a day that Allison Doocy will never forget. Kendyl Lindaman likely won't, either. Both former Ankeny softball stars were in the state of Florida on that Thursday when they found out that their season had been cancelled by the NCAA due to the coronavirus. Lindaman and her Florida teammates were preparing for a weekend series against Baylor … END_OF_DOCUMENT_TOKEN_TO_BE_REPLACED 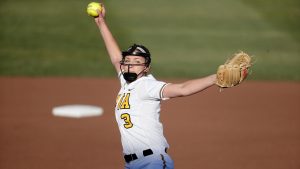 Former Ankeny pitcher Allison Doocy has been honored by the Big Ten Conference for the third time in her career. The University of Iowa junior righthander was named Big Ten Pitcher of the Week on Monday. She also received that honor last season (March 12, 2018) and was previously named the Big Ten Freshman of the Week on April 17, 2017. Doocy picked up … END_OF_DOCUMENT_TOKEN_TO_BE_REPLACED

Allison Doocy allowed two earned runs on four hits as Iowa dropped a 4-2 decision to Iowa State, but the sophomore has enjoyed numerous highlights this season while posting a 12-12 record. https://www.youtube.com/watch?v=8hsaxjccBM4 … END_OF_DOCUMENT_TOKEN_TO_BE_REPLACED