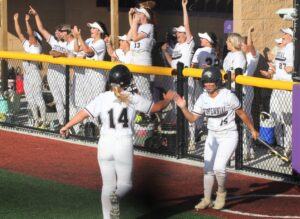 If Monday's CIML softball doubleheader at Johnston had been a boxing match, the judges likely would have ruled the outcome a draw. Tenth-ranked Ankeny Centennial won the first game, 3-1, in eight innings before the No. 3 Dragons salvaged a split of the twinbill with a 5-1 victory in the nightcap. The Jaguars are now 7-1 on the season, while Johnston … END_OF_DOCUMENT_TOKEN_TO_BE_REPLACED

The Ankeny Centennial softball team is embracing its tough early-season schedule. The Jaguars played three more ranked opponents at the ADM Invitational on Friday and Saturday. They went 2-2 at the tournament and are now 5-7 on the season with three one-run losses while playing nine ranked teams in their first 12 games. "We love our schedule," said … END_OF_DOCUMENT_TOKEN_TO_BE_REPLACED