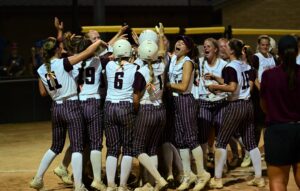 Kendra Winfrey has established herself as one of the top pitchers on the Ankeny softball team. It turns out she's a pretty good hitter, too. Winfrey pitched a complete game and also slugged two home runs to lead the 13th-ranked Hawkettes to a 13-6 victory in the nightcap of Wednesday's doubleheader at No. 11 Ankeny Centennial. The win ended a five-game … END_OF_DOCUMENT_TOKEN_TO_BE_REPLACED