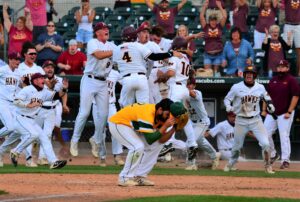 Just a few months after the Ankeny boys' basketball team won the Class 4A state title, the school's baseball squad will have a chance to win a championship of its own. Second-ranked Ankeny advanced to the Class 4A title game with a wild 9-8 victory over No. 4 Dubuque Hempstead in the semifinals on Friday at Principal Park. Ryan Madole scored from third … END_OF_DOCUMENT_TOKEN_TO_BE_REPLACED 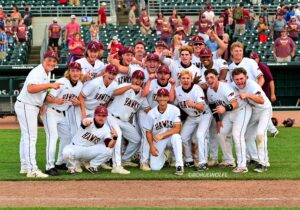 The Ankeny baseball team advanced to the Class 4A championship game in dramatic, walk-off fashion. Ryan Madole scored from third base on a wild pitch with one out in the bottom of the seventh inning to give the second-ranked Hawks a wild 9-8 victory over No. 4 Dubuque Hempstead in the semifinals on Friday at Principal Park. Ankeny (21-8) will play No. … END_OF_DOCUMENT_TOKEN_TO_BE_REPLACED 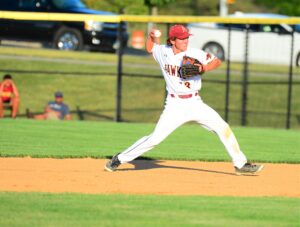 Junior second baseman Carter Smith has helped the second-ranked Ankeny baseball team to a 19-8 record. He went 1-for-3 and scored a run as the Hawks posted a 5-0 victory over visiting Council Bluffs Lincoln in a Class 4A substate final on Wednesday. Smith is batting .302 with two doubles, one triple and 15 RBIs. He ranks second on the team with 25 runs … END_OF_DOCUMENT_TOKEN_TO_BE_REPLACED