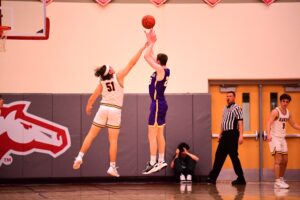 Senior post player Braden Simonsen has helped the ninth-ranked Ankeny boys' basketball team to a 19-4 record and a berth in this week's Class 4A state tournament. He had four points, five rebounds and two blocks as the Hawks defeated Waukee, 62-57, in a substate final on Tuesday at Dallas Center-Grimes. Simonsen is averaging 6.3 points and 3.9 rebounds … END_OF_DOCUMENT_TOKEN_TO_BE_REPLACED 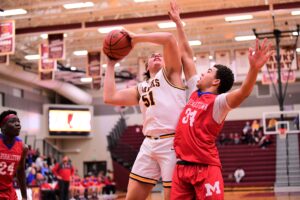 When the Ankeny boys' basketball team jumped out to a 17-1 lead against visiting Marshalltown on Friday, it appeared that the game would be a rout. But the Bobcats didn't go down without a fight. Marshalltown closed the gap to just three points on three different occasions before the Hawks pulled away for a 65-53 victory in the CIML Iowa Conference … END_OF_DOCUMENT_TOKEN_TO_BE_REPLACED 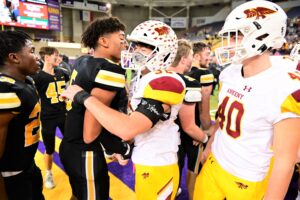 (Story by Rob Gray) It hurts to watch. You’re helpless. The game is essentially decided and the opposing team is flexing and raising its arms on the sideline with 3-plus minutes left. That’s where Ankeny’s football players found themselves late in Friday night’s 24-7 rematch loss to Southeast Polk in the Class 5A championship game and — you … END_OF_DOCUMENT_TOKEN_TO_BE_REPLACED 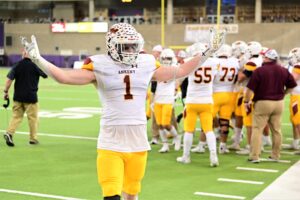 Nobody can blame Mason Morrow if he has some nightmares this week. The Valley quarterback was running for his life Friday all over the UNI-Dome turf. Ankeny used a suffocating defensive effort to limit Morrow and the Tigers to 248 total yards and rolled to a 35-13 victory in the Class 5A semifinals at Cedar Falls. The Hawks avenged an earlier 38-35 … END_OF_DOCUMENT_TOKEN_TO_BE_REPLACED 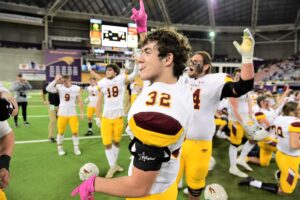 Colin Kadolph and the Ankeny football team are one win away from defending their state title. Kadolph rushed for 183 yards and scored four touchdowns to lead the Hawks to a 35-13 victory over Valley in the Class 5A semifinals on Friday at the UNI-Dome in Cedar Falls. "He makes me so proud," Ankeny defensive lineman Braden Simonsen said of Kadolph. "He … END_OF_DOCUMENT_TOKEN_TO_BE_REPLACED