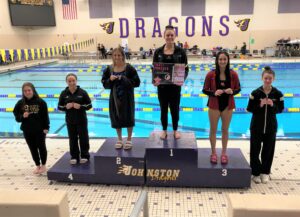 Ankeny's Erica Peters is headed to the state diving meet for the fourth consecutive year. Teammate Hannah Kolars will be making her second straight trip. Both divers advanced to the state meet with strong performances on Thursday in a regional meet at Summit Middle School, which hosted both the Ankeny and Johnston regionals. Another Ankeny diver, Lydia … END_OF_DOCUMENT_TOKEN_TO_BE_REPLACED 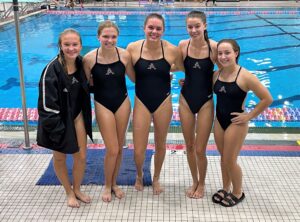 Thanks to a strong performance by its divers, the Ankeny girls' swimming team is off to a good start in the CIML Iowa Conference meet. Erica Peters won her second consecutive conference title on Tuesday at Marshalltown, while teammates Hannah Kolars and Lydia Boehlert also placed among the top seven finishers. The swimming portion of the meet will be held … END_OF_DOCUMENT_TOKEN_TO_BE_REPLACED 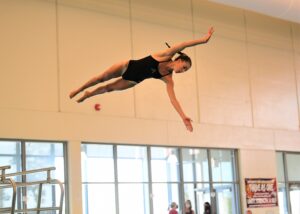 Three Ankeny divers competed in the Tiger Tanker Invitational on Saturday at Valley, and all of them earned top-eight finishes. "It was a nice day of diving for the girls. All three of them had a personal best," said Ankeny diving coach Mandy Parton. "We had some tough competition, which is always a great challenge!" Erica Peters placed second with … END_OF_DOCUMENT_TOKEN_TO_BE_REPLACED 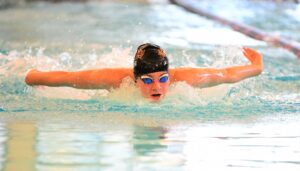 The Ankeny girls' swimming team has been spending a lot of time on the bus. After traveling to Fort Dodge on Sept. 14 and then going to Iowa City on Saturday for the Little Hawk Invitational, the Hawkettes hit the road again on Tuesday and rolled to a 147-38 victory at Marshalltown. They improved their records to 2-0 in the CIML Iowa Conference and 4-1 … END_OF_DOCUMENT_TOKEN_TO_BE_REPLACED 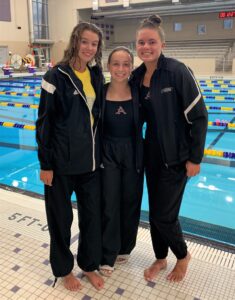 Last year, the Ankeny girls' swimming team had three divers among the top 13 finishers at the state meet. The Hawkettes might be able to duplicate that feat this season. Even though Dasha Toth has graduated, Ankeny showed off its diving depth on Monday at the Johnston Invitational. The Hawkettes placed three girls among the top six finishers in the … END_OF_DOCUMENT_TOKEN_TO_BE_REPLACED