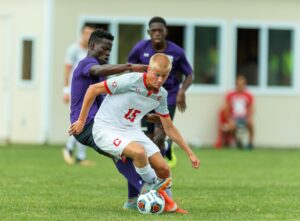 Central College's Charlie Pritchard controls the ball during a game against Ozarks last season. The former Ankeny standout has decided to transfer to St. Cloud State, which is starting a new program in 2020. (Photo courtesy of Dan L. Vander Beek) When St. Cloud State dropped its football program after the 2019 season, it brought an abrupt end to Avery … END_OF_DOCUMENT_TOKEN_TO_BE_REPLACED 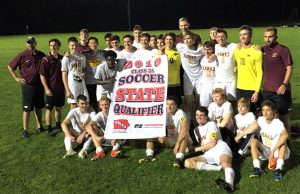 The Ankeny boys' soccer team advanced to the state tournament for the third time in four seasons with a 4-1 victory over Des Moines Lincoln in a Class 3A substate final on Saturday at Cownie Park. (Photo by Dan Holm) Ankeny's Charlie Pritchard had to sit out the final game of last year's boys' state soccer tournament after picking up a red card following … END_OF_DOCUMENT_TOKEN_TO_BE_REPLACED 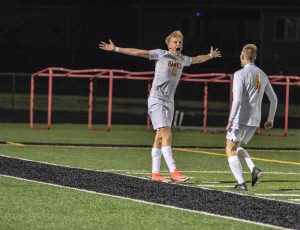 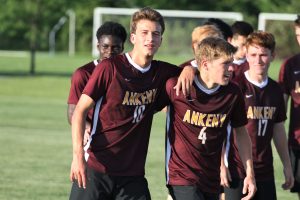 Ankeny's Kolby Raineri, left, celebrates with his teammates after the Hawks defeated Cedar Rapids Prairie in a Class 3A quarterfinal at last year's state tournament. Raineri scored two goals in his team's 3-0 victory and went on to lead the Hawks to a third-place finish. He was named to the all-tournament team. (Photo by Dan Holm) Senior midfielder Kolby … END_OF_DOCUMENT_TOKEN_TO_BE_REPLACED 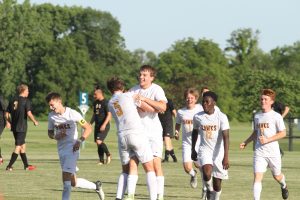 Somehow, the Ankeny boys' soccer team will have to find a way to regroup. The sixth-ranked Hawks (16-5) will play No. 5 Iowa City West (18-4) for third place in the Class 3A state tournament on Saturday at 4:10 p.m. after suffering a heartbreaking loss in Friday's semifinals at Cownie Soccer Complex in Des Moines. Ankeny built a 3-0 lead against No. 3 … END_OF_DOCUMENT_TOKEN_TO_BE_REPLACED