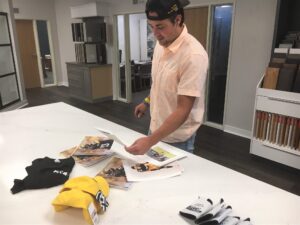 Iowa defensive back Riley Moss has joined the growing list of collegiate athletes who have decided to capitalize on the name, image and likeness law that went into effect on July 1. Moss, a former Ankeny Centennial star, signed an NIL agreement with The Kitchen and Bath Company in Ankeny on Thursday. "It's really cool, especially because it's my … END_OF_DOCUMENT_TOKEN_TO_BE_REPLACED

Check out the latest edition of the Ankeny Fanatic weekly podcast sponsored by Coldwell Banker Mid-America. Publisher Dan Holm interviews former Ankeny Centennial football stars Tyler Rodgers and Brady Petersen of Iowa State, Jake Pinegar of Penn State and Riley Moss of Iowa about the 2020 season and looks ahead to the future. … END_OF_DOCUMENT_TOKEN_TO_BE_REPLACED 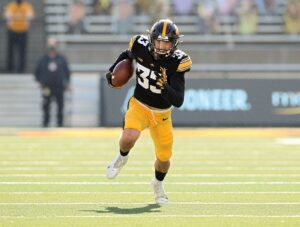 There must be something about Rocky Lombardi that brings out the best in Riley Moss. Whatever it is, Moss just seems to have Lombardi's number. On Saturday, the former Ankeny Centennial defensive back intercepted a pass from Lombardi in the second quarter and returned it 54 yards for a touchdown to give Iowa a 35-0 lead over Michigan State at Kinnick … END_OF_DOCUMENT_TOKEN_TO_BE_REPLACED 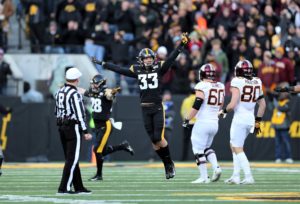 The Minnesota Gophers seem to bring out the best in Riley Moss. Moss, a former Ankeny Centennial star, intercepted two passes in Iowa's 48-31 victory at Minnesota last season. On Saturday, the sophomore defensive back came up with perhaps the biggest play of his collegiate career. Moss intercepted another pass on Minnesota's final drive to seal the … END_OF_DOCUMENT_TOKEN_TO_BE_REPLACED